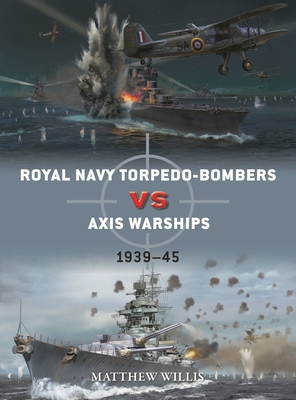 By  Matthew Willis , Illustrated By  Jim Laurier
$ 22.00
Pre-Order (Not Yet Published)

Drawing on rare, historical photography and specially commissioned artwork, Matthew Willis explores the heroic feats of the few Royal Navy's obsolescent biplanes that stood between the state-of-the-art Axis warships and their objectives.

Focusing on the technical specifications of both opponents, using original records, and detailed armament and cockpit views, this book explores the key attributes and drawbacks of the disadvantaged Royal Navy torpedo-bombers against the mighty Regia Marina and Kriegsmarine destroyers and raiders, covering a wide range of sea battles, from the more famous attacks such as the strike on the Bismarck, the tragic events of the Channel Dash or the clash with the Italian battle fleet at Taranto, to less covered sea battles such as the Battle of Matapan.

Despite their powerful weaponry and heavy armour protection, the Axis warships proved vulnerable to a skillfully and audaciously flown torpedo-bomber, thanks to innovative commanders exploiting every possible advantage. Including rare personal recollections from the airmen who flew the torpedo-bombers and historical accounts from the Axis warship crews, this book describes each and every facet of this dramatic duel.

Matthew Willis is a writer and editor, specialising in naval and aviation history. His first full-length non-fiction work was on the Blackburn Skua and Roc. Since then, he has explored lesser-known areas of aviation history, particularly with regard to naval history. He focuses on original research and bringing out the voices of those who were there at the time. He is a frequent contributor to the historic aviation media, with features published in journals such as Aeroplane, Flight Path, The Aviation Historian and Flypast. He runs the website Naval Air History.

Jim Laurier is a native of New England and lives in New Hampshire. He attended Paier School of Art in Hamden, Connecticut, from 1974–78, and since graduating with Honours, he has been working professionally in the field of Fine Art and Illustration. He has been commissioned to paint for the US Air Force and has aviation paintings on permanent display at the Pentagon.