Ghosts of the Past (Inspector Bordelli) 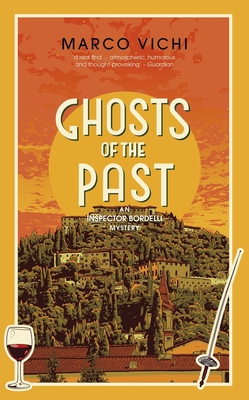 Ghosts of the Past (Inspector Bordelli)

A family cloaked in secrets. A beguiling woman. A unique setting. Inspector Bordelli is back to solve one of the most difficult cases of his entire career in the sixth book in this atmospheric crime noir series - perfect for fans of Andrea Camilleri.

Florence, 1967. It is winter, and one year has passed since the historic and devastating flood of the Arno, though the memories of that day still linger with the stains on the city walls.

The anniversary of the flood brings with it a new case for Inspector Bordelli, who is weighed down with remorse for having taken justice into his own hands, and yearning for Eleonora, the woman he's lost, when the mystery opens. A local wealthy industrialist - fiercely loved and respected by everyone he knew - has been found murdered in his grand villa in the Fiesole hills, and the killer has left no trace.

With no obvious leads to follow, Bordelli is patiently retracing the victim's last days when he encounters an old friend from the war. Inviting the frail man into his home with the aim of restoring him to strength with good food and wine, Bordelli is yet to realise that this very friend will lead him ever closer to the secrets at the heart of the mystery - starting with a mysterious woman . . .

Marco Vichi was born in Florence in 1957. The author of twelve novels and two collections of short stories, he has also edited crime anthologies, written screenplays, music lyrics and for radio, and collaborated on and directed various projects for humanitarian causes. His novel Death in Florence won the Scerbanenco, Rieti, Camaiore and Azzeccagarbugli prizes in Italy.

Marco Vichi lives in the Chianti region of Tuscany. You can find out more at www.marcovichi.it.