A History of New York in 101 Objects 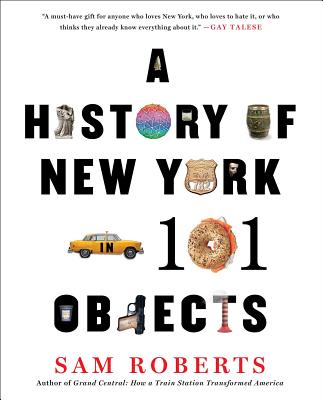 A History of New York in 101 Objects

“Delightfully surprising….A portable virtual museum…an entertaining stroll through the history of one of the world’s great cities” (Kirkus Reviews), told through 101 distinctive objects that span the history of New York, almost all reproduced in luscious, full color.

Inspired by A History of the World in 100 Objects, Sam Roberts of The New York Times chose fifty objects that embody the narrative of New York for a feature article in the paper. Many more suggestions came from readers, and so Roberts has expanded the list to 101. Here are just a few of what this keepsake volume offers:

-The Flushing Remonstrance, a 1657 petition for religious freedom that was a precursor to the First Amendment to the Constitution.
-Beads from the African Burial Ground, 1700s. Slavery was legal in New York until 1827, although many free blacks lived in the city. The African Burial Ground closed in 1792 and was only recently rediscovered.
-The bagel, early 1900s. The quintessential and undisputed New York food (excepting perhaps the pizza).
-The Automat vending machine, 1912. Put a nickel in the slot and get a cup of coffee or a piece of pie. It was the early twentieth century version of fast food.
-The “I Love NY” logo designed by Milton Glaser in 1977 for a campaign to increase tourism. Along with Saul Steinberg’s famous New Yorker cover depicting a New Yorker’s view of the world, it was perhaps the most famous and most frequently reproduced graphic symbol of the time.

Unique, sometimes whimsical, always important, A History of New York in 101 Objects is a beautiful chronicle of the remarkable history of the Big Apple. “The story [Sam Roberts] is telling is that of New York, and he nails it” (Daily News, New York).

Sam Roberts is urban affairs correspondent for The New York Times. He is the host of The New York Times Close Up, an hour-long weekly news and interview program on cable channel NY1 that he inaugurated in 1992. He is the author or editor of eight previous books, including a new edition of The Brother. He lives in New York City. Follow @ObjectsofNYC or visit ObjectsofNYC.com.