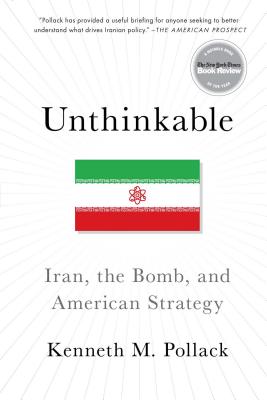 The world’s foremost expert on Middle Eastern relations explains Iran’s current nuclear potential and what America can do about it: “Engrossing…If Congress gets a vote on going to war with Iran, let’s hope that this book is on everyone’s reading lists” (The Economist).

In 2005, Kenneth Pollack’s first book about foreign policy in Iran, The Persian Puzzle, sparked a national conversation, laying out the possible options for nuclear deterrent in Iran. But, despite the attention his solutions received, the world didn’t follow his advice. Now, Iran is even closer to possessing nuclear weapons, and America will have to find a new path forward.

In Unthinkable, a New York Times and Economist Best Book of 2013 Pollack explores the intractable American problem with Iran, and Tehran’s pursuit of nuclear weapons capability. With the authority of his years as a CIA analyst and his time as the Director of Persian Gulf Affairs on the National Security Council, Pollack keenly examines the nature of the Iranian threat to American interests and the long-going clash that has led us to this point. Pollack explains and assesses the options for American policymakers: redoubling our efforts at a “carrot-and-stick” approach that combines negotiations and sanctions; aiding the Iranian opposition to bring about a popular form of regime change; an Israeli military strike; the American military option; and containing a nuclear Iran. Ultimately, Pollack argues for an assertive version of containment to maintain pressure on Tehran and minimize its ability to contribute to the problems of the Middle East by keeping it largely on the defensive.

“Learned, lucid, and deeply sobering” (Kirkus Reviews), Pollack has written one of the most important books on foreign policy in this decade.

Kenneth Pollack is a well-known expert on the Middle East and Persian Gulf and has appeared on The Oprah Winfrey Show, The Daily Show with Jon Stewart, Charlie Rose, C-SPAN, and NPR. He is a senior fellow at the Saban Center for Middle East Policy at the Brookings Institution in Washington, DC. Dr. Pollack earned his BA from Yale and a PhD from the Massachusetts Institute of Technology. He is the author of seven other books on the political, military, and economic affairs of the Middle East, including Unthinkable, The Threatening Storm and The Persian Puzzle.