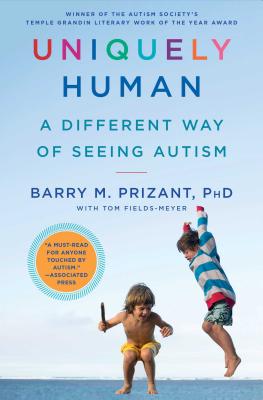 Winner of the Autism Society of America’s Dr. Temple Grandin Award for the Outstanding Literary Work in Autism

A groundbreaking book on autism, by one of the world’s leading experts, who portrays autism as a unique way of being human—this is “required reading....Breathtakingly simple and profoundly positive” (Chicago Tribune).

Autism therapy typically focuses on ridding individuals of “autistic” symptoms such as difficulties interacting socially, problems in communicating, sensory challenges, and repetitive behavior patterns. Now Dr. Barry M. Prizant offers a new and compelling paradigm: the most successful approaches to autism don’t aim at fixing a person by eliminating symptoms, but rather seeking to understand the individual’s experience and what underlies the behavior.

“A must-read for anyone touched by autism... Dr. Prizant’s Uniquely Human is a crucial step in promoting better understanding and a more humane approach” (Associated Press). Instead of classifying “autistic” behaviors as signs of pathology, Dr. Prizant sees them as part of a range of strategies to cope with a world that feels chaotic and overwhelming. Rather than curb these behaviors, it’s better to enhance abilities, build on strengths, and offer supports that will lead to more desirable behavior and a better quality of life.

“A remarkable approach to autism....A truly impactful, necessary book” (Kirkus Reviews, starred review), Uniquely Human offers inspiration and practical advice drawn from Dr. Prizant’s four-decade career. It conveys a deep respect for people with autism and their own unique qualities. Filled with humanity and wisdom, Uniquely Human “should reassure parents and caregivers of kids with autism and any other disability that their kids are not broken, but, indeed, special” (Booklist, starred review).

Barry M. Prizant, PhD, CCC-SLP, is among the world’s leading authorities on autism, with more than forty years of experience as a scholar, researcher, and international consultant. He is an adjunct professor at Brown University and coauthor of The SCERTS Model: A Comprehensive Educational Approach, now being implemented in more than a dozen countries. Dr. Prizant has published more than 120 articles and chapters and has received many awards. The author of Uniquely Human: A Different Way of Seeing Autism, Dr. Prizant lives in Cranston, Rhode Island, with his wife, Dr. Elaine Meyer, and their teenage son.

Tom Fields-Meyer is author of the critically acclaimed memoir Following Ezra: What One Father Learned About Gumby, Otters, Autism, and Love from His Extraordinary Son, a finalist for the National Jewish Book Award. His work has appeared in The New York Times Magazine, The Wall Street Journal, the Los Angeles Times, and The Washington Post. The coauthor (with Barry M. Prizant) of Uniquely Human: A Different Way of Seeing Autism, and former senior writer for People, he lives in Los Angeles, where he teaches in the UCLA Extension Writers’ Program.