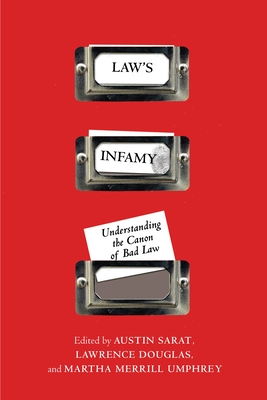 From the murder of George Floyd to the systematic dismantling of voting rights, our laws and their implementation are actively shaping the course of our nation. But however abhorrent a legal decision might be--whether Dred Scott v. Sanford or Plessy v. Ferguson--the stories we tell of the law's failures refer to their injustice and rarely label them in the language of infamy. Yet in many instances, infamy is part of the story law tells about citizens' conduct. Such stories of individual infamy work on both the social and legal level to stigmatize and ostracize people, to mark them as unredeemably other. Law's Infamy seeks to alter that course by making legal actions and decisions the subject of an inquiry about infamy. Taken together, the essays demonstrate how legal institutions themselves engage in infamous actions and urge that scholars and activists label them as such, highlighting the damage done when law itself acts infamously and focus of infamous decisions that are worthy of repudiation. Law's Infamy asks when and why the word infamy should be used to characterize legal decisions or actions. This is a much-needed addition to the broader conversation and questions surrounding law's complicity in evil.

Austin Sarat (Editor) Austin Sarat is William Nelson Cromwell Professor of Jurisprudence and Political Science at Amherst College. He has collaborated with Charles J. Ogletree on numerous works for NYU Press, including Racial Reconciliation and the Healing of a Nation: Beyond Law and Rights, Punishment in Popular Culture, When Law Fails: Making Sense of Miscarriages of Justice, The Road to Abolition? The Future of Capital Punishment in the United States, and From Lynch Mobs to the Killing State: Race and the Death Penalty in America. He is also the co-editor of Guns in Law, Criminals and Enemies, Law's Mistakes, Reimagining "To Kill a Mockingbird" Family, . Community, and the Possibility of Equal Justice under Law, and many others. Lawrence Douglas (Editor) Lawrence Douglas is the James J. Grosfeld Professor of Law, Jurisprudence and Social Thought and Chair of Law, Jurisprudence, and Social Thought at Amherst College. Professor Douglas is the author of seven books, including The Memory of Judgment: Making Law and History in the Trials of the Holocaust and The Right Wrong Man: John Demjanjuk and the Last Great Nazi War Crimes Trial, a New York Times Editor's Choice. His most recent book is Will He Go? Trump and the Looming Electoral Meltdown in 2020. Martha M. Umphrey (Editor) Martha Merrill Umphrey is Bertrand H. Snell 1894 Professor in American Government in the Department of Law, Jurisprudence and Social Thought at Amherst College, and President of the Association for the Study of Law, Culture, and the Humanities. She is the co-editor of Lives in the Law, The Place of Law, and The Limits of Law, among others.