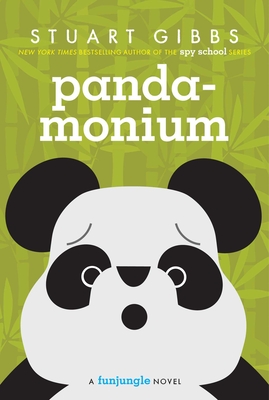 By  Stuart Gibbs
Paperback
$ 8.99
On Our Shelves Now

FunJungle is frenzied, awaiting the arrival of its most thrilling animal yet—Li Ping—a rare and very expensive giant panda that the zoo went to enormous lengths to secure. But when the truck transporting Li Ping shows up, its precious cargo has vanished into thin air. The FBI steps in to investigate, and Teddy is happy to leave the job in their (supposedly) capable hands. After all, FunJungle has never encountered a crime this serious.

But when someone threatens to blackmail Teddy’s girlfriend, Summer, if he doesn’t solve the crime, his involvement in this mystery is no longer black and white.

Stuart Gibbs is the New York Times bestselling author of the Charlie Thorne series, the FunJungle series, Moon Base Alpha series, and Spy School series. He has written screenplays, worked on a whole bunch of animated films, developed TV shows, been a newspaper columnist, and researched capybaras (the world’s largest rodents). Stuart lives with his family in Los Angeles. You can learn more about what he’s up to at StuartGibbs.com.