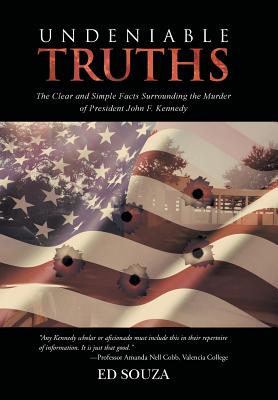 "Since we forget the implications of the assassination of President John F. Kennedy at our peril I welcome and support the recent work of Ed Souza's Undeniable Truths....Welcome aboard Mr. Souza." --Mark Lane- Author of Rush to Judgment To many, the murder of President John F. Kennedy was the defining tragedy of the twentieth century. To many, the intricate and pervasive veil of lies generated by the Warren Commission and some of our own government agencies is an egregious and continuing insult to our collective intelligence, integrity, and dignity. To many, there are more questions than plausible answers. But for one former LA cop, private investigator, and professor of criminal justice, the time has come to put forth the clear and plausible answers too many have craved for too long. In Undeniable Truths, Professor Ed Souza applies modern investigative techniques and theories to present the clear and simple facts surrounding this infamous murder. His approach exposes the lies, cover-ups, and misinformation involved in this case. He explores some of the murder's most enduring mysteries: Why was President Kennedy really murdered? Who really did--and did not--want Kennedy eliminated? Why--and how--was Oswald chosen as the scapegoat? Through the use of time tested police strategies, the author puts decades of professional research to the task of solving one of history's most enduring unsolved crimes.