Real-World Software Development: A Project-Driven Guide to Fundamentals in Java 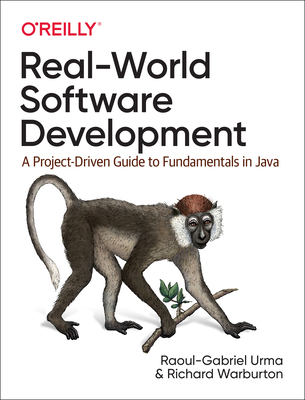 Real-World Software Development: A Project-Driven Guide to Fundamentals in Java

By  Raoul-Gabriel Urma , Richard Warburton
$ 59.99
Out of Stock In Store (Available to Order)

Explore the latest Java-based software development techniques and methodologies through the project-based approach in this practical guide. Unlike books that use abstract examples and lots of theory, Real-World Software Development shows you how to develop several relevant projects while learning best practices along the way.

Dr. Raoul-Gabriel Urma is the CEO and founder of Cambridge Spark, a leader in transformational data science and AI training, career development, and progression. He is author of several programming books, including the best seller Modern Java in Action (Manning). Raoul-Gabriel holds a PhD in Computer Science from Cambridge University as well as an MEng in Computer Science from Imperial College London and graduated with first-class honors, having won several prizes for technical innovation. His research interests lie in the area of programming languages, compilers, source code analysis, machine learning, and education. He was nominated an Oracle Java Champion in 2017. He is also an experienced international speaker, having delivered talks covering Java, Python, Artificial Intelligence, and Business. Raoul has advised and worked for several organizations on large-scale software engineering projects including at Google, Oracle, eBay, and Goldman Sachs.Richard Warburton is an empirical technologist and solver of deep-dive technical problems. Recently he has worked on data analytics for high performance computing and authored Java 8 Lambdas for O'Reilly. He is a leader in the London Java Community and organized the Adopt-a-JSR programs for Lambdas and Date and Time in Java 8. Richard also frequently speaks at conferences, and has presented at JavaOne, DevoxxUK, Geecon, Jfokus and JAX London. He obtained a PhD in Computer Science from The University of Warwick, where his research focused on compiler theory.