Beyond Bourbon St.: An Insider's Guide to New Orleans 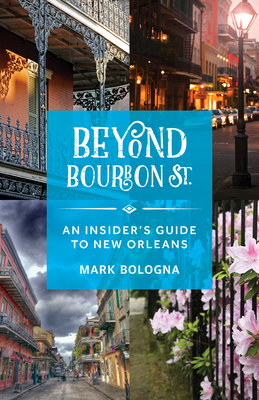 Beyond Bourbon St.: An Insider's Guide to New Orleans

New Orleans is so much more than the Bourbon Street scenes you may have seen--it's a 300-year-old city made up of vibrant neighborhoods, diverse populations, and traditions layered upon each other. World class food is available not only in our famous restaurants, but in corner restaurants across the city. Mardi Gras is the party we throw for ourselves, but invite the world to take part in. If partying with 1,000,000 friends is not your style, there are festivals nearly every week of the year to suit your taste and interests. Join Mark Bologna, host of the popular Beyond Bourbon Street podcast and curator of the Instagram page of the same name, as he explores the people, places, music, history and culture that make New Orleans unique.

Mark Bologna is a husband, father of twin seven-year old girls, a runner, host of the Beyond Bourbon Street podcast, and a New Orleanian. Mark grew up in the Gentilly neighborhood of New Orleans, near Lake Pontchartrain. His family owned Teddy's Grill, a neighborhood restaurant known for slow-cooked roast beef po-boys, stewed chicken, and red beans and rice. The Beyond Bourbon Street podcast was launched in December 2015 and is published bi-weekly. Mark takes you along as he explores the people, places, music, history and culture that make New Orleans unique.