The Great Boston Fire: The Inferno That Nearly Incinerated the City 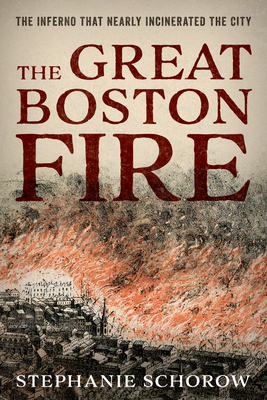 The Great Boston Fire: The Inferno That Nearly Incinerated the City

The 1872 Great Boston Fire was barely contained after two days of spreading rapidly across the city, becoming one of the most expensive fire disasters in America. Stephanie Schorow, a seasoned Boston veteran, masterfully recounts the stories and heroics surrounding the fire, those which have all been slowly forgotten by the public. Collaborating with the Boston Fire Historical Society and featuring artwork from the time period, a dramatic narrative retold for a modern audience.

Stephanie Schorow is a veteran journalist who has worked for the Boston Herald, the Associated Press, and other media. Her previous books include: Inside the Combat Zone: The Stripped Down Story of Boston's Most Notorious Neighborhood; Drinking Boston: A History of the City and its Spirits; Boston on Fire: A History of Fires and Firefighting in Boston; and The Cocoanut Grove Fire. See www.stephanieschorow.com