The Last Survivor: The Incredible Story of the Man Who Survived Three Concentration Camps and a Major Maritime Disaster Near the End of W 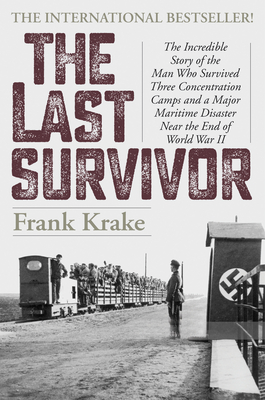 The Last Survivor: The Incredible Story of the Man Who Survived Three Concentration Camps and a Major Maritime Disaster Near the End of W

By  Frank Krake , Translator  Haico Kaashoek
$ 29.95
Out of Stock In Store

THE LAST SURVIVOR is the incredible story of a man who survived three concentration camps and a major maritime disaster at the end of WW II. Stowed away on top of a train, twenty-year-old Wim Aloserij escapes the obligatory 'Arbeitseinsatz' (forced or "slave" labor) in Germany in 1943. The young man from Amsterdam then goes into hiding on a farm and sleeps for months in a wooden chest hidden underground. Despite his efforts to stay there, he is captured during a raid and taken to the infamous Gestapo prison in Amsterdam, after which he is imprisoned in Camp Amersfoort. A few weeks later he is sent on a transport to northern Germany. There, he is forced to work in Camp Husum and Camp Neuengamme, an experience many men will not survive but Wim nevertheless does, in part thanks to the harsh lessons he learned from his alcoholic and physically abusive stepfather. With the end of the war in sight, Wim ends up on the German luxury cruise liner the Cap Arcona, anchored in the Bay of L beck. While the Allies force Nazi Germany into submission on the docks, the RAF make a terrible mistake at sea. Fighter planes bomb several of the anchored ships, including the Cap Arcona, and in what soon becomes a veritable inferno 7,000 prisoners die. Together with just a few hundred other passengers, Wim survives one of the worst maritime disasters of all time.

Frank Krake was born in the Netherlands in 1968 and studied Marketing Strategy at the University of Groningen. He has written three biographies: Menthol (2016) about a Black man who taught the Dutch how to brush their teeth, Hannelore (2020) about a girl who lived in a cult for decades, and The Last Witness (2018), about Wim Aloserij.