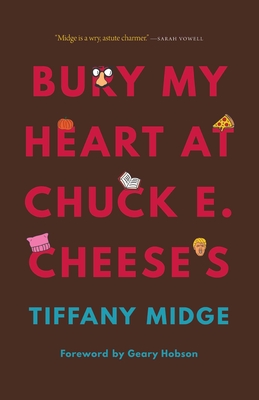 By  Tiffany Midge , Foreword by  Geary Hobson
Paperback
$ 19.95
On Our Shelves Now

Bury My Heart at Chuck E. Cheese’s is a powerful and compelling collection of Tiffany Midge’s musings on life, politics, and identity as a Native woman in America. Artfully blending sly humor, social commentary, and meditations on love and loss, Midge weaves short, standalone musings into a memoir that stares down colonialism while chastising hipsters for abusing pumpkin spice. She explains why she doesn’t like pussy hats, mercilessly dismantles pretendians, and confesses her own struggles with white-bread privilege.

Midge ponders Standing Rock, feminism, and a tweeting president, all while exploring her own complex identity and the loss of her mother. Employing humor as an act of resistance, these slices of life and matchless takes on urban-indigenous identity disrupt the colonial narrative and provide commentary on popular culture, media, feminism, and the complications of identity, race, and politics.

Tiffany Midge is a citizen of the Standing Rock Sioux tribe and was raised in the Pacific Northwest. She is a former columnist for Indian Country Today and taught writing and composition for Northwest Indian College. Midge’s award-winning books include The Woman Who Married a Bear and Outlaws, Renegades, and Saints: Diary of a Mixed-Up Halfbreed. She resides in Moscow, Idaho, where she has served as the city’s poet laureate. Geary Hobson is an emeritus professor of English at the University of Oklahoma. He is the author of numerous books, including The Last of the Ofos.