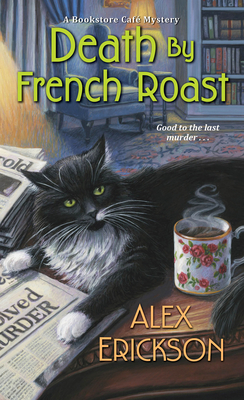 By  Alex Erickson
Mass Market
$ 8.99
Out of Stock In Store (Available to Order)

Krissy Hancock runs a bookstore-café in Pine Hills, Ohio, but she’ll be setting up shop as a sleuth when she discovers a long-unsolved murder . . .

Krissy’s helping a friend clean out her late mother’s house when she learns that although the deceased died peacefully at an advanced age, her brother did not. In fact, Wade was killed more than thirty years ago, and the case was never closed. What surprises Krissy even more is that she has a personal connection to the story—her friend Rita was seeing Wade at the time, scandalizing the town with the couple’s large age difference.

With an older Rita now part of Krissy’s writing group—and another member with police experience—she starts digging up gossip, talking to the victim’s local coffee klatsch, and trying to find real clues amid the old rumors. But things just seem to grow muddier as she fights to identify whodunit . . .

Alex Erickson has always wanted to write, even at a young, impressionable age. He’s always had an interest in the motive behind murder, which has led him down his current path. He’s always ready with a witty—at least in his opinion—quip, and tries to keep every conversation light and friendly. Alex lives in Ohio with his family and resident felines, who provide endless amounts of inspiration. You can visit him on Twitter at twitter.com/AEricksonbooks and on Facebook at: www.facebook.com/alexericksonbooks.