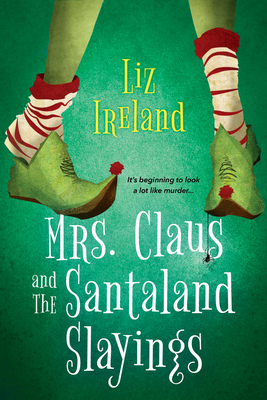 This Christmas season, travel to the North Pole you’ve never seen before—where Santa’s new wife, April Claus, is not only set on creating the perfect holiday—she’s also set on solving the perfect crime…

Love is full of surprises—though few compare to realizing that you’re marrying the real-life Santa. April Claus dearly loves her new husband, Nick, but adjusting to life in the North Pole is not all sugarplums and candy canes. Especially when a cantankerous elf named Giblet Hollyberry is killed—felled by a black widow spider in his stocking—shortly after publicly arguing with Nick.

Christmastown is hardly a hotbed of crime, aside from mishaps caused by too much eggnog, but April disagrees with Constable Crinkle’s verdict of accidental death. As April sets out to find the culprit, it’ll mean putting the future of Christmas on the line—and hoping her own name isn’t on a lethal naughty list . . .

Liz Ireland is the author of many works of women's fiction, romance, and mystery. She also writes under the names Elizabeth Bass and Liz Freeland. Like her character April Claus, Liz spends too much time in concert bands. Originally from the United States, she now lives on Vancouver Island in British Columbia. She’s currently working on the next Mrs. Claus mystery.