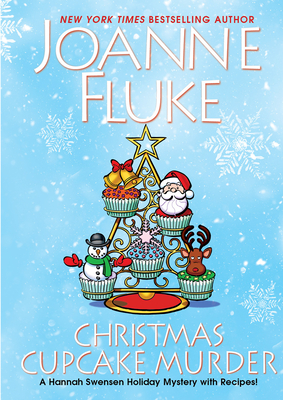 By  Joanne Fluke
Hardcover
$ 22.95
Out of Stock In Store (Available to Order)

Featuring over a dozen cookie and dessert recipes from The Cookie Jar—Hannah Swensen’s famous bakery, this festive new Christmas mystery from the Queen of Culinary Cozies is just the holiday treat you need this season!

As December turns Lake Eden into the North Pole, the heat is on in Hannah Swensen’s kitchen to honor two Christmas promises: baking irresistible holiday cupcakes and preventing murder!

While Hannah speeds through a lengthy holiday checklist, drama in town grows like Santa’s waistline on Christmas Eve. Her sister Andrea wants to stave off the blues by helping out at The Cookie Jar, Michelle’s love life is becoming complicated, Lisa needs Hannah’s advice, and Delores has a Christmas secret she’s not willing to share. But nothing dampens the holiday mood more than the chilling mystery surrounding the man found near death in an abandoned storefront two doors down from Hannah’s bakery . . .

The befuddled John Doe can’t recall a thing about himself—except for his unusual knowledge of restoring antique furniture. With a smattering of clues and barely enough time to frost Christmas cookies, Hannah must solve a deadly puzzle that could leave her dashing through the snow for her life!

“Fun characters, delicious treats and a dash of danger abound in this super-sweet whodunit.”
—Woman’s World

JOANNE FLUKE is the New York Times bestselling author of the Hannah Swensen mysteries, which include Chocolate Cream Pie Murder, Raspberry Danish Murder, Cinnamon Roll Murder, and the book that started it all, Chocolate Chip Cookie Murder. That first installment in the series premiered as Murder, She Baked:  A Chocolate Chip Cookie Mystery on the Hallmark Movies & Mysteries Channel. Like Hannah Swensen, Joanne Fluke was born and raised in a small town in rural Minnesota, but now lives in Southern California. Please visit her online at www.JoanneFluke.com.