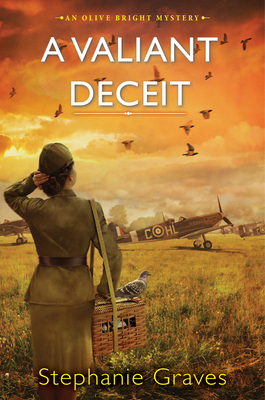 By  Stephanie Graves
Hardcover
$ 26.00
Out of Stock In Store (Available to Order)

Weaving intrigue, rural village life, and little-known historical facts about the role of carrier pigeons in WWII, Stephanie Graves continues the adventures of Olive Bright, a young pigeoneer who, along with her racing birds, has been conscripted to aid the fight against the Nazis. It’s not the daring role she’d envisioned for herself, but balancing a pretend romance with the real murder mysteries in her quiet little English village is more complicated than she imagined…

Returning to Pipley following her FANY (First Aid Nursing Yeomanry) training, Olive is eager to step up her involvement in the war effort. Her pigeons are being conscripted to aid the Belgian resistance, and it’s up to Olive to choose the best birds for the mission. To protect the secrecy of their work, she must also continue the ruse of being romantically involved with her superior, Captain Jameson Aldridge, a task made more challenging by the fact that she really does have feelings for the gruff Irish intelligence officer.

But perhaps the greatest challenge of all comes when an instructor at Station XVII, the top-secret training school housed at Brickendonbury Manor, is found dead in Balls Wood by a troop of Girl Guides. The police quickly rule Lieutenant Jeremy Beckett’s death an accident, but based on clues she finds at the scene, Olive begins to suspect he might have been a spy. Involving the reluctant Jamie, she is determined to solve the murder and possibly stop a threat to their intelligence efforts which could put the Belgians—not to mention her pigeons—in grave danger.

Stephanie Graves is the author of the Olive Bright Mysteries, as well as four novels under the pseudonym Alyssa Goodnight. As a graduate of The University of Texas at Austin, she worked in Austin as a product engineer on automotive application microcontrollers before returning to Houston and becoming the mom of two boys. She is a self-professed connoisseur of British mysteries of all sorts and has done extensive research on the little-known role of pigeons during the war, as well as the Special Operations Executive, particularly their school for sabotage, Station XVII: Brickendonbury Manor. Please visit her online at MsStephGraves.com.