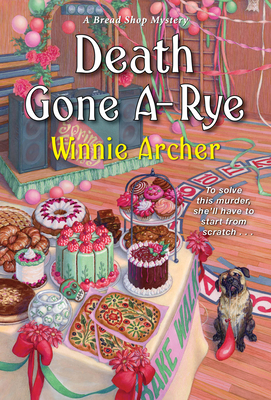 By  Winnie Archer
Mass Market
$ 8.99
Out of Stock In Store (Available to Order)

In the Northern California seaside town of Santa Sofia, a killer is trying to get a rise out of baker's apprentice Ivy Culpepper . . .

Vincent van Dough focaccia is being touted on Instagram as the best thing since sliced bread. By strategically placing chives, olives, and yellow peppers to look like poppies and sunflowers, bakers create a mouthwatering masterpiece in the style of the great postimpressionist painter. At Yeast of Eden, where bread making has always been an art, they're baking their own version for the school district's Spring Fling.

But one person won't be tasting the Mexican bakery's latest specialty. Ambitious school board president Nessa Renchrik has been murdered. Like the rest of this close-knit community, Ivy is shocked. But she's just as surprised to discover her beau-restaurateur Miguel Baptista-had his own fling with Nessa back in the day and now the police have this half-baked notion he might have killed her. It's up to Ivy, her boss Olaya Solis, and eighty-six-years-young Penelope Branford to separate the wheat from the chaff to determine who the real culprit is . . .

Winnie Archer is the nationally bestselling author of the Bread Shop Mystery series, as well as the Lola Cruz Mysteries and the Magical Dressmaking Mystery series written as Melissa Bourbon. A former middle school English teacher, lives in North Carolina with her educator husband, Carlos, and the youngest of their five children. She can be found online at MelissaBourbon.com.