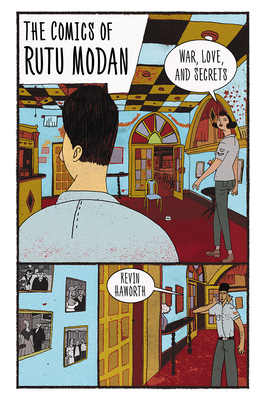 By  Kevin Haworth
Paperback
$ 30.00
Out of Stock In Store (Click to Order)

Best known for her Eisner Award-winning graphic novels, Exit Wounds and The Property, Rutu Modan's richly colored compositions invite readers into complex Israeli society, opening up a world too often defined only by news headlines. Her strong female protagonists stick out in a comics scene still too dominated by men, as she combines a mystery novelist's plotting with a memoirist's insights into psychology and trauma.

The Comics of Rutu Modan: War, Love, and Secrets conducts a close reading of her work and examines her role in creating a comics arts scene in Israel. Drawing upon archival research, Kevin Haworth traces the history of Israeli comics from its beginning as 1930s cheap children's stories, through the counterculture movement of the 1970s, to the burst of creativity that began in the 1990s and continues full force today. Based on new interviews with Modan (b. 1966) and other comics artists, Haworth indicates the key role of Actus Tragicus, the collective that changed Israeli comics forever and launched her career. Haworth shows how Modan's work grew from experimental minicomics to critically acclaimed graphic novels, delving into the creative process behind Exit Wounds and The Property. He analyzes how the recurring themes of family secrets and absence weave through her stories and how she adapts the famous clear line illustration style to her morally complex tales. Though still relatively young, Modan has produced a remarkably varied oeuvre. Identifying influences from the United States and Europe, Haworth illustrates how Modan's work is global in its appeal, even as it forms a core of the thriving Israeli cultural scene.

Kevin Haworth, 2016 National Endowment for the Arts Fellow in Creative Writing, is author of four books: the novel The Discontinuity of Small Things--winner of the Samuel Goldberg Foundation Prize and first runner-up for the Dayton Literary Peace Prize; the essay collection Famous Drownings in Literary History; the limited-edition chapbook Far Out All My Life; and a collection of essays about writing, Lit from Within: Contemporary Masters on the Art and Craft of Writing, coedited with Dinty W. Moore and named an American Library Association Outstanding Title. Haworth's work has appeared in Creative Nonfiction, Fourth Genre, Iowa Review, McSweeney's Internet Tendency, Michigan Quarterly Review, and World Literature Today. He lives in Pittsburgh and teaches at Carnegie Mellon University.