Beyond the Half-Way Covenant 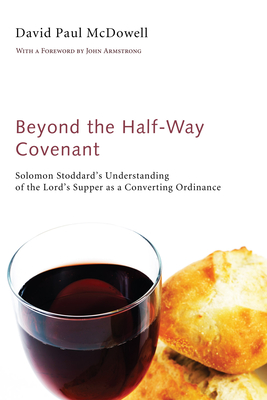 Beyond the Half-Way Covenant

By  David Paul McDowell , Foreword by  John Armstrong
Hardcover
$ 36.00
Out of Stock In Store (Click to Order)

Description: Almost everyone has heard of Jonathan Edwards, but very few are familiar with Solomon Stoddard, Edwards's grandfather. Stoddard was an influential force in New England Puritanism, often referred to as the ""Pope"" of the Connecticut Valley of western Massachusetts. He was a powerful preacher who saw five (possibly six) revivals during his fifty-eight-year pastorate in Northampton. Yet, he has often been marginalized because of his very unique view of the Lord's Supper as a ""converting ordinance."" This book explores Stoddard's view of Communion as compared to the changing face of Puritanism reflected in the Half-Way Covenant, and in the context of his passionate desire to convert the sinner by any means at his disposal. He believed that God was so gracious and sovereign that no one could judge whether a person was elect or not. Consequently, he crafted an evangelical theology based upon the preaching of the gospel and viewed the Lord's Supper as another form of preaching for the conversion of sinners. About the Contributor(s): David Paul McDowell is the Senior Pastor of the Community Fellowship Church, West Chicago, Illinois. He is a graduate of Wheaton College, Gordon-Conwell Theological Seminary, Union Theological Seminary, and Trinity Theological Seminary. He has served for twenty-five years as Senior Pastor of the College Church in Northampton, Massachusetts.