The Alien Next Door 5: Baseball Blues 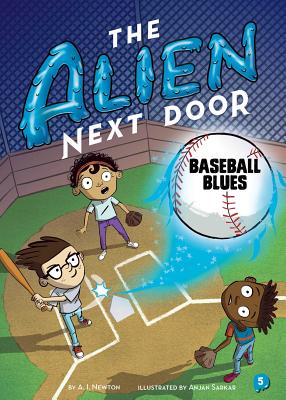 The Alien Next Door 5: Baseball Blues

By  A.I. Newton , Illustrated By  Anjan Sarkar
Paperback
$ 5.99
Out of Stock In Store (Available to Order)

In the fifth book of the Alien Next Door series, Zeke, Harris, and Roxy all try out for the baseball team, but Zeke can't resist using his powers to help him play better than everyone else.

It's baseball season, and Zeke, Harris, and Roxy all decide to try out for the team. Zeke doesn't quite know how to play baseball, but his powers allow him to pitch and hit better than anyone else! But Harris thinks that what Zeke is doing is cheating, since none of the other players have his powers, and he's also concerned that someone might discover Zeke's an alien. But Zeke doesn't see a problem with this, causing tension in their friendship. Can Zeke and Harris save their friendship, or will they strike out?

A.I. Newton always wanted to travel into space, visit another planet, and meet an alien. When that plan didn't work out, he decided to do the next best thing-write stories about aliens and space travel! The Alien Next Door series gives him a chance to imagine what it's like to hang out with an alien. And you can do the same-unless, of course, you are lucky enough to live next door to a real-life alien!

Anjan Sarkar graduated from Manchester Metropolitan University with a degree in illustration. After that, he worked as an illustrator and graphic designer before becoming a freelancer, where he gets to work on all sorts of different projects for people of all ages! He lives in Sheffield, UK. Find out more about Anjan at anjansarkar.co.uk.