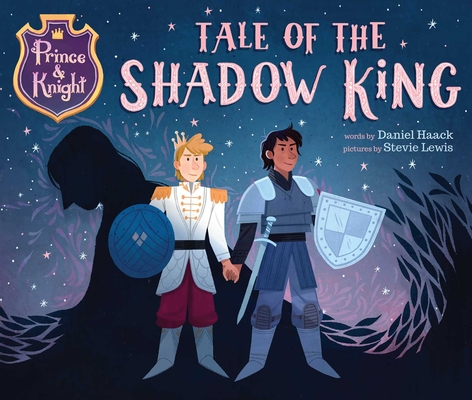 By  Daniel Haack , Illustrated By  Stevie Lewis
$ 17.99
On Our Shelves Now

This follow-up to Prince & Knight is an inclusive, modern fairy tale for young readers!

"An illuminating fairy tale for young readers to be able to see that not every prince would like to marry a princess." -School Library Journal

Have you heard the thrilling tale
of the prince and his dear knight?
Their love for one another
inspired everyone in sight.

Our brave and dashing heroes, the prince and the knight, are happily married and their kingdom is prospering, but soon, a fog of darkness that blocks the sun spreads across their land. They get word that the cause of this is a dark and mysterious Shadow King, and they rush off to find and stop him, but encounter many obstacles along the way. Will they be able to restore the light to their kingdom?

Daniel Haack is an Emmy Award winner who's also the author of Prince & Knight and Maiden & Princess. He loves writing stories that are filled with action and adventure (and okay, maybe a little bit of romance, too). He graduated from Ithaca College as a Park Scholar and was a Saul Zaentz Fellow at the Harvard Graduate School of Education. A former Wisconsin farm boy, Daniel currently lives in Los Angeles.

Stevie Lewis has been living on the road for the past two years, furthering her passion for climbing, art, and the outdoors. Striving to live simply and tread lightly on the earth, she gathers inspiration from a variety of adventures, be it climbing in the high desert in central Oregon, hiking in the wilderness of Alaska, or sharing laughs with fellow travelers around a campfire. After years of working in animation, she now illustrates children's books and creates art based on her travels. She is the illustrator of Prince & Knight; Sun! One in a Billion,;Moon! Earth's Best Friend; and Lost in the Library.