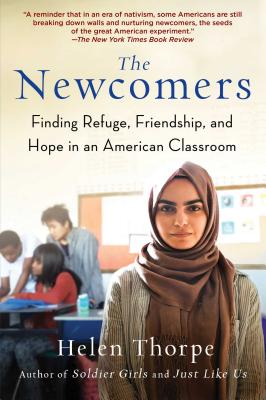 “A delicate and heartbreaking mystery story...Thorpe’s book is a reminder that in an era of nativism, some Americans are still breaking down walls and nurturing newcomers, the seeds of the great American experiment.” —The New York Times Book Review

“The teens we meet have endured things none of us can imagine…and [this book has] never been more crucial than at this moment.” —USA TODAY

“Helen Thorpe has taken policy and turned it into literature.” —Malcolm Gladwell

From the award-winning, “meticulously observant” author of Soldier Girls and Just Like Us comes a powerful and moving account of how refugee teenagers at a public high school learn English and become Americans, in the care of a compassionate teacher.

The Newcomers follows the lives of twenty-two immigrant teenagers throughout the course of the 2015-2016 school year as they land at South High School in Denver, Colorado. These newcomers, from fourteen to nineteen years old, come from nations convulsed by drought or famine or war. Many come directly from refugee camps, after experiencing dire forms of cataclysm. Some arrive alone, having left or lost every other member of their original family.

At the center of their story is Mr. Williams, their dedicated and endlessly resourceful teacher of English Language Acquisition. If Mr. Williams does his job right, the newcomers will leave his class at the end of the school year with basic English skills and new confidence, their foundation for becoming Americans and finding a place in their new home. Ultimately, “The Newcomers reads more like an anthropologist’s notebook than a work of reportage: Helen Thorpe not only observes, she chips in her two cents and participates. Like her, we’re moved and agitated by this story of refugee teenagers…Donald Trump’s gross slander of refugees and immigrants is countered on every page by the evidence of these students’ lives and characters” (Los Angeles Review of Books).

With the US at a political crossroads around questions of immigration, multiculturalism, and America’s role on the global stage, Thorpe presents a fresh and nuanced perspective. The Newcomers is “not only an intimate look at lives immigrant teens live, but it is a primer on the art and science of new language acquisition and a portrait of ongoing and emerging global horrors and the human fallout that arrives on our shores” (USA TODAY).

Helen Thorpe was born in London to Irish parents and grew up in New Jersey. Her journalism has appeared in The New York Times Magazine, New York magazine, The New Yorker, Slate, and Harper’s Bazaar. Her radio stories have aired on This American Life and Sound Print. She is the author of Just Like Us, Soldier Girls, and The Newcomers and lives in Denver.