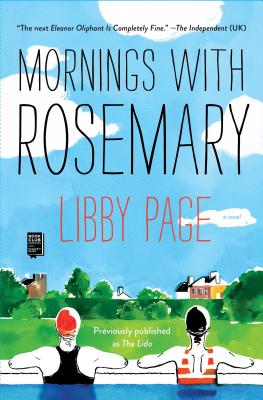 The international bestselling debut about friendship and love—featuring the life-changing relationship between an anxious young reporter and an eighty-six-year-old lifelong swimmer that “follows in the footsteps of the enormously popular A Man Called Ove…charming and heartwarming” (Kirkus Reviews).

Rosemary Peterson has lived in Brixton, London, all her life, but everything is changing.

The library where she used to work has closed. The family grocery store has become a trendy bar. And now the lido, an outdoor pool where she’s swum daily since its opening, is threatened with closure by a local housing developer. It was at the lido that Rosemary escaped the devastation of World War II; here she fell in love with her husband, George; here she found community during her marriage and since George’s death.

Twentysomething Kate Matthews has moved to Brixton and feels desperately alone. A once-promising writer, she now covers forgettable stories for her local paper. That is, until she’s assigned to write about the lido’s closing. Soon Kate’s portrait of the pool focuses on a singular woman: Rosemary. And as Rosemary slowly opens up to Kate, both women are nourished and transformed in ways they never thought possible.

“Charming [and] an unusually poignant tale of married love” (The Washington Post), Mornings with Rosemary is a feel-good novel that captures the heart and spirit of a community across generations—an irresistible tale of love, loss, aging, and friendship.

*Originally published as The Lido

Libby Page graduated from The London College of Fashion with a BA in fashion journalism before going on to work as a journalist at The Guardian. After writing, her second passion is outdoor swimming. Libby lives in London, where she enjoys finding new swimming spots and pockets of community within the city. Mornings with Rosemary (originally published as The Lido) is her first novel. Follow her on Twitter @LibbyPageWrites and Instagram @TheSwimmingSisters.