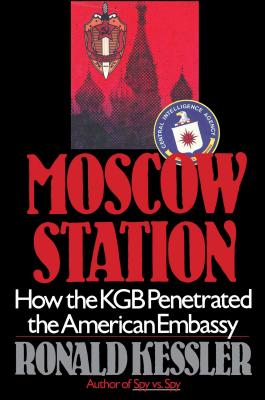 From the author of Spy vs. Spy comes an analysis of how the KGB was able to infiltrate the U.S. Embassy and steal top-secret codes, revealing the neglect of American security from the ambassadorial level down.

In the pages of Moscow Station, readers are taken deep into the inner workings of two of the most powerful intelligence armies in the world. Ronald Kessler presents the details on how the Soviet Union was able to rig bugging devices in the entirety of the U.S. Embassy, including the CIA station.

In a mix of hard evidence and Kessler’s own theories, this thrilling and eye-opening look at the KGBs infiltration of the U.S. embassy chronicles the Soviet seduction and sexual entrapment of the young Marine soldiers guarding the building, as well as the incompetence and arrogance of the CIA that led to the security hack.

Ronald Kessler is an award-winning journalist and bestselling author of more than twenty nonfiction books about the White House, CIA, FBI, and Secret Service. Some of his works include Spy vs. Spy, Moscow Station, Inside the White House, and The Trump White House.