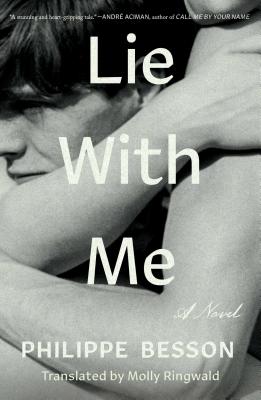 By  Philippe Besson , Translated by  Molly Ringwald
Hardcover
$ 25.00
Out of Stock In Store (Available to Order)

“Stunning and heart-gripping.” —André Aciman, author of Call Me By Your Name

Just outside a hotel in Bordeaux, Philippe chances upon a young man who bears a striking resemblance to his first love. What follows is a look back at the relationship he’s never forgotten, a hidden affair with a gorgeous boy named Thomas during their last year of high school. Without ever acknowledging they know each other in the halls, they steal time to meet in secret, carrying on a passionate, world-altering affair.

Dazzlingly rendered in English by Ringwald in her first-ever translation, Besson’s powerfully moving coming-of-age story captures the eroticism and tenderness of first love—and the heartbreaking passage of time.

Philippe Besson is an author, screenwriter, and playwright. His first novel, In the Absence of Men, was awarded the Emmanuel-Roblès Prize in 2001, and he is also the author of, among others, Late Autumn (Grand Prize RTL-Lire), A Boy from Italy, and The Atlantic House. In 2017 he published Lie With Me, a #1 French bestseller that won the the Maisons de la Presse Prize, and A Character from a Novel, an intimate portrait of Emmanuel Macron during his presidential campaign. His novels have been translated into twenty different languages.

Molly Ringwald’s writing has appeared in The New Yorker, The New York Times, The Guardian, and Vogue, and she is the author of the bestselling novel-in-stories When It Happens to You. She previously translated Lie with Me, a novel by Philippe Besson.