Cornell '77: The Music, the Myth, and the Magnificence of the Grateful Dead's Concert at Barton Hall 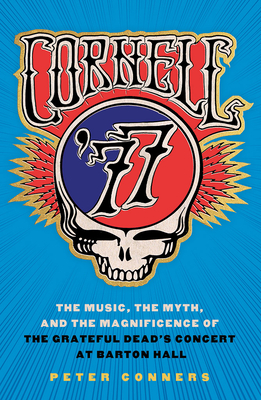 Cornell '77: The Music, the Myth, and the Magnificence of the Grateful Dead's Concert at Barton Hall

On May 8, 1977, at Barton Hall, on the Cornell University campus, in front of 8,500 eager fans, the Grateful Dead played a show so significant that the Library of Congress inducted it into the National Recording Registry. The band had just released Terrapin Station and was still finding its feet after an extended hiatus. In 1977, the Grateful Dead reached a musical peak, and their East Coast spring tour featured an exceptional string of performances, including the one at Cornell.Many Deadheads claim that the quality of the live recording of the show made by Betty Cantor-Jackson (a member of the crew) elevated its importance. Once those recordings--referred to as Betty Boards--began to circulate among Deadheads, the reputation of the Cornell '77 show grew exponentially.With time the show at Barton Hall acquired legendary status in the community of Deadheads and audiophiles.Rooted in dozens of interviews--including a conversation with Betty Cantor-Jackson about her recording--and accompanied by a dazzling selection of never-before-seen concert photographs, Cornell '77 is about far more than just a single Grateful Dead concert. It is a social and cultural history of one of America's most enduring and iconic musical acts, their devoted fans, and a group of Cornell students whose passion for music drove them to bring the Dead to Barton Hall. Peter Conners has intimate knowledge of the fan culture surrounding the Dead, and his expertise brings the show to life. He leads readers through a song-by-song analysis of the performance, from New Minglewood Blues to One More Saturday Night, and conveys why, forty years later, Cornell '77 is still considered a touchstone in the history of the band.As Conners notes in his Prologue: You will hear from Deadheads who went to the show. You will hear from non-Deadhead Cornell graduates who were responsible for putting on the show in the first place. You will hear from record executives, academics, scholars, Dead family members, tapers, traders, and trolls. You will hear from those who still live the Grateful Dead every day. You will hear from those who would rather keep their Grateful Dead passions private for reasons both personal and professional. You will hear stories about the early days of being a Deadhead and what it was like to attend, and perhaps record, those early shows, including Cornell '77.

Peter Conners has written extensively about music and counterculture, including his books Growing Up Dead: The Hallucinated Confessions of a Teenage Deadhead, JAMerica: The History of the Jam Band and Festival Scene, and White Hand Society: The Psychedelic Partnership of Timothy Leary and Allen Ginsberg. He lives in Rochester, NY, where he is Publisher of BOA Editions, Ltd.