Super Bomb: Organizational Conflict and the Development of the Hydrogen Bomb (Cornell Studies in Security Affairs) 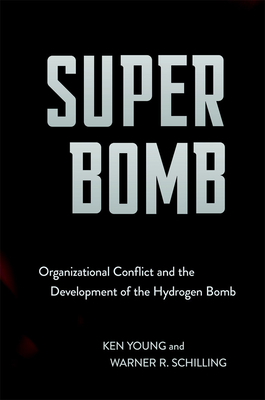 Super Bomb: Organizational Conflict and the Development of the Hydrogen Bomb (Cornell Studies in Security Affairs)

Super Bomb unveils the story of the events leading up to President Harry S. Truman's 1950 decision to develop a super, or hydrogen, bomb. That fateful decision and its immediate consequences are detailed in a diverse and complete account built on newly released archives and previously hidden contemporaneous interviews with more than sixty political, military, and scientific figures who were involved in the decision.

Ken Young and Warner R. Schilling present the expectations, hopes, and fears of the key individuals who lobbied for and against developing the H-bomb. They portray the conflicts that arose over the H-bomb as rooted in the distinct interests of the Atomic Energy Commission, the Los Alamos laboratory, the Pentagon and State Department, the Congress, and the White House. But as they clearly show, once Truman made his decision in 1950, resistance to the H-bomb opportunistically shifted to new debates about the development of tactical nuclear weapons, continental air defense, and other aspects of nuclear weapons policy. What Super Bomb reveals is that in many ways the H-bomb struggle was a proxy battle over the morality and effectiveness of strategic bombardment and the role and doctrine of the US Strategic Air Command.

The late Ken Young was Professor of Public Policy at King's College, London. He was a Fellow of the Royal Historical Society and the Academy of Social Sciences and the author of The American Bomb in Britain. The late Warner R. Schilling was James T. Shotwell Professor of International Relations Emeritus at Columbia University, where he taught for six decades and served as director of Columbia's Institute of War and Peace Studies. He published books and articles on civil-military relations, military technology, nuclear strategy, and the role of science in foreign policy.