The Marian Option: God's Solution to a Civilization in Crisis 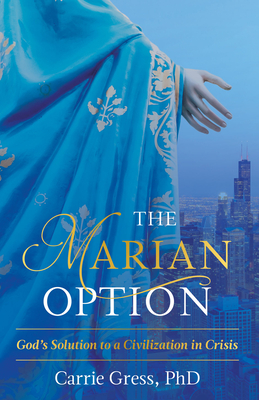 The Marian Option: God's Solution to a Civilization in Crisis

"How can we save civilization?" It's becoming a common question. As the world descends into chaos, Christians are thinking deeply about how to stem the tide. Many options have been presented to overcome Christian persecution and cultural decadence, but the The Marian Option is one that is already in motion...and has been for centuries.

Dr. Carrie Gress provides a thoroughly researched account of the significant cultural and military events where Mary interceded on behalf us, her children. With a detective's eye, Gress uncovers the fascinating details of Mary's role in major geopolitical shifts, showing how instrumental Our Mother was in: Beyond the battlefield, The Marian Option also highlights the link between Marian devotion and culture, showing how the arts flourish when devotion to her is strong. If we want to protect our children and our faith--if we want to restore civilization to Christ--Mary is the key. Not only is she keenly interested in assisting Christians, she has the ability to do so, even in the face of the gravest odds. We just have to ask. The Marian Option will leave you with a new perspective on the Blessed Mother, a renewed hope in the future of the Church and the world. INCLUDES AN APPENDIX WITH A ROAD MAP OF PRACTICAL ADVICE AND EXAMPLES FOR EVERY CATHOLIC (INCLUDING CHILDREN) TO LIVE OUT THE MARIAN OPTION.

Carrie Gress is a Fellow at The Ethics and Public Policy Center and a Scholar at The Institute for Human Ecology at Catholic University of America. She is a prolific writer and author of several books, including The Marian Option, The Anti-Mary Exposed, and Theology of Home. She and her husband, and five children, live in Virginia. She is also the editor of the online Catholic women's magazine, TheologyofHome.com.