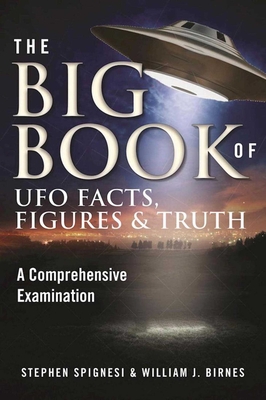 Here is a mothership full of entertaining, informative tales that shed a revealing light on the UFO phenomenon—from inexplicable cattle mutilations and modern astronauts who have seen UFOs to close encounters of the third and fourth kind!

The Big Book of UFO Facts, Figures & Truth is at once a valuable reference and an engrossing guide for all those fascinated with unexplained phenomenon. Turning to any page at random, readers are sure to find new facts and information, as well as dozens of rare, irrefutable photos.

In addition, readers will learn how they can access a special website which includes actual video evidence of UFOs. This just may be the most comprehensive UFO guide available.

“It is incredibly arrogant on the part of mankind to believe that in a universe unimaginably vast, humans are the only life form in existence. Perhaps the chapters that follow will mitigate this foolhardy—and ultimately dangerous—terran narcissism. The galaxy—and beyond—is not only mankind’s playground anymore … and the skies await us. Godspeed.”

William J. Birnes is the New York Times bestselling author of The Day After Roswell and many other books including the Skyhorse titles Dr. Feelgood, Wounded Minds, and The Big Book of UFO Facts, Figures & Truth. He was the consulting producer, writer, and lead host of the History Channel's "UFO Hunters," and the publisher of UFO Magazine from 1998 through 2014. He lives in Lambertville, NJ.