The Jewish State: The Historic Essay that Led to the Creation of the State of Israel 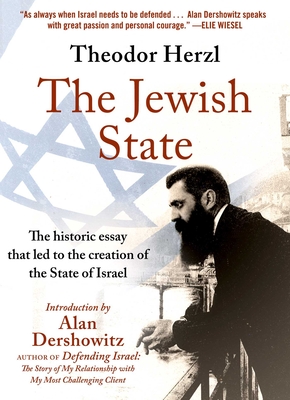 The Jewish State: The Historic Essay that Led to the Creation of the State of Israel

Foreword by  Alan Dershowitz , Theodor Herzl
$ 9.99
Out of Stock In Store (Click to Order)

Originally published in 1896 as Der Judenstaat, The Jewish State has taken its place among the likes of The Communist Manifesto and Common Sense as polemic writings which have changed modern history. Theodor Herzl’s advocacy for a separate, independent Jewish state as a remedy for centuries of hostility and persecution served as the basis for modern Zionism. And though his vision would not be realized in his lifetime, it did set the course for the creation of the Israel we know today.

This edition, based on the original translation to English by Sylvie D’Avigdor, includes a foreword by Alan Dershowitz, who is among Israel’s most prominent and most vocal scholars defenders. The Harvard law professor, who has been calledIsrael’s lead lawyer in the court of public opinion, discusses The Jewish State’s place in history and its impact today.

Alan Dershowitz is one of the most famous and celebrated lawyers in America. He was the youngest full professor in Harvard Law School history, where he is now the Felix Frankfurter Professor of Law, Emeritus. The author of numerous bestselling books, from Chutzpah to The Best Defense to Reversal of Fortune (which was made into an Academy Award-winning film) and to The Case for Israel, Dershowitz has advised and defended many of the most famous legal cases of the past fifty years, including O.J. Simpson, Anatoly Sharansky, Michael Milken, Claus von Bulow, and Mike Tyson. His most recent book, The Case Against Impeaching Trump, is a New York Times bestseller.

Theodore Herzl was an Austro-Hungarian journalist, playwright, political activist, and writer. Herzl formed the Zionist Organization and promoted Jewish immigration to Palestine in an effort to form a Jewish state  He is known as the father of modern political Zionism and the state of Israel.