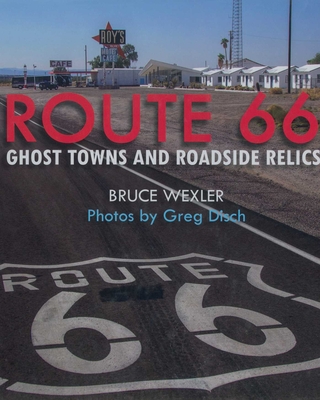 By  Bruce Wexler
Paperback
$ 19.99
Pre-Order (Not Yet Published)

Buckle Up and Get Your Kicks on Route 66​!

Originally paved in the 1920s, the 2,451 miles of Route 66 have been a staple of the American Road Trip and have become an iconic thread running through the life, history, and culture of America. Spanning a total of eight states and stretching from Chicago all the way to the Pacific Ocean, Route 66 was appropriately named the "Mother Road" by John Steinbeck. An icon of American Folklore, Route 66 details slew of old gas stations, restaurants, diners, rest stops, and other attractions. Each must-see vestige is peppered with the history of the area.

Route 66: Ghost Towns and Roadside Relics takes the reader along the whole length pf the most iconic stretch of road in the world. The book brings the essence of the Mother Road to life as it swings by nostalgic towns, faded motels, vintage gas stations, dilapidated signs, and famous landmarks on the route.

So buckle up and Get Your Kicks on Route 66!

Bruce Wexler has had a lifelong fascination with American culture, from Western movies to cars to toys. He lived for many years in Pennsylvania before returning home to his native England. Previous books include The Wild, Wild West of Louis L’Amour and John Wayne's Wild West. He lives in London.