An Essay in the History of the Radical Sensibility in America 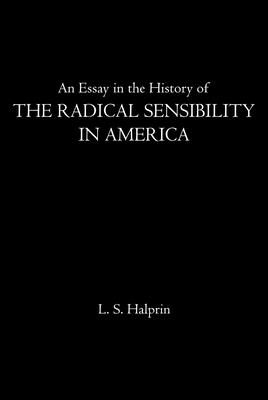 An Essay in the History of the Radical Sensibility in America

How do you use the word "radical?" Committed to the progressive? The cooperative? The communal? The equalitarian?

In An Essay in the History of the Radical Sensibility in America, L.S. Halprin argues that before the middle of the nineteenth century the work of all American radicals was organized to defend some form of sentimental faith in millennial progress; that the work of the great writers of the middle of the nineteenth century was the first to be fundamentally free of the constraints of sentimentality; that despite that generation’s accomplishments, the old sentimentalities have persisted, perpetuating the cycle in which illusions designed to make radicalism’s chances seem better than they are become the disillusions which make them seem worse.

Along the way, Halprin unfolds something of the contribution of Edgar Alan Poe, Nathaniel Hawthorne, Herman Melville, and Walt Whitman to the specific content of the radical sensibility in America. Since the middle of the nineteenth century, the radical’s work has been primarily to accomplish political power. That work and the frustrations of it often leave little energy for the pursuit of a thoroughgoing self-awareness. Halprin's analysis is particularly useful now to remind readers of both the sentimentalities and the wisdoms from which we come.

In the 1930s, Lee Halprin began sharing his parents’ thrilling embrace of America’s and Europe’s great radical writing. Then in the 1940s he attended Uppsala College, followed by Columbia University. Halprin has taught at Harvard University and the New England Conservatory of Music. He resides in Cambridge, Massachusetts.