Ensenada as a Birthplace of Mexican Democracy: A Political History of Baja California 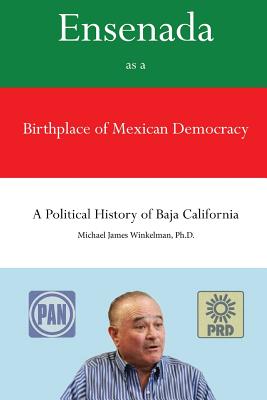 Ensenada as a Birthplace of Mexican Democracy: A Political History of Baja California

This book examines the historical basis for the claim that Ensenada, Baja California Mexico is the "birthplace of Mexican democracy." Historical analyses demonstrate that democratic tendencies are deeply rooted in the past of Ensenada. From its inception Ensenada was distinct from the rest of Mexico, a distinctiveness born from the foreign influences that gave Ensenada its democratic tendencies. These democratic tendencies have been manifested across the history of Ensenada and provided the foundations that gave rise to a peaceful democratic revolution that began first in Ensenada, then spread to Baja California, and finally to all of Mexico, when the Partido de Acci n Nacional swept the institutionalized party from power in the 2000 elections. This book examines the political changes in Ensenada across the 19th and 20th centuries leading up to these history-making events in the 1980s. This book begins with the 18th century foundations of the northern Baja California region by the missionaries and continues through the end of the 20th century when the Partido Revolucionario Institucional was removed from power by the electoral process. The analyses focus on the historical development of the economic, social and political institutions of the region and how the cultural dynamics produced by the distance from Mexico City and the proximity to the U.S. contributed to the particular character of the people from Ensenada. The introduction (Chapter 1) lays out the rational for the book and provides a context for understanding the international importance of Ensenada. This is followed by a consideration of the colonial foundations and the ranching developments and filibuster movements of the 19th century (Chapter 2); the American and British colonization of the Ensenada region (Chapter 3); the autonomous developments during the Mexican Revolution (Chapter 4); the rise of the entrepreneurial class during American Prohibition (Chapter 5); the regional developments spurred by the Great Depression and World War II (Chapter 6); the heightening of local dissatisfaction during the early statehood period for Baja California (Chapter 7); and the democratic political revolution that took place in Ensenada and Baja California during the 1980's and 1990's (Chapter 8). The history of Ensenada is characterized by a variety of forms of political resistance to the dominant political system of Mexico in exemplifying democratic forms of political participation. Ensenada enthusiastically embraced democratic processes even before they were first allowed to elect their own council in 1888. Ensenadenses resisted the prerogatives of presidentialismo, the pattern of the Mexican President appointing strangers to govern Baja California. This resistance was manifested in a democratic electoral rebellion in Ensenada in the 1980's that elected mayors from both the left, the Socialist Workers' Party (PST); and the right, the Partido de Acci n Nacional (PAN) that achieved an end to the domination of the municipal government by the Partido Revolucionario Institucional (PRI). This success in democracy with the election of Ernesto Ruffo Appel, a manager of a fish processing plant in Ensenada, as mayor of the municipality of Ensenada in 1986 was a stepping-stone to his becoming the first opposition party governor in modern Mexico with his election in 1989. As governor Ruffo Appel instituted electoral reforms that propelled national electoral reforms which are seen by some political observers as leading to the history making election of PAN party candidate Vicente Fox as president of Mexico in 2000, ending the 71-year rule of Mexico by the PRI. This dramatic change in national politics inspired some in Ensenada to claim that their town is the "birthplace of Mexican democracy," with Ruffo Apple's election propelling the radical political changes that swept through Mexican national politics in the following decade.

Michael James Winkelman, Ph.D. (University of California-Irvine 1985) began research in Baja California in 1981, studying curanderismo, herbalism and spiritualism. From 1989-2006 he served as the Director of the Arizona State University Ethnographic Field School in Ensenada, Baja California. During those summers there he directed student research projects, participated in local historical societies, and engaged in archival and ethnographic research. Winkelman may be reached at www.michaelwinkelman.com.