Fight Like Jesus: How Jesus Waged Peace Throughout Holy Week 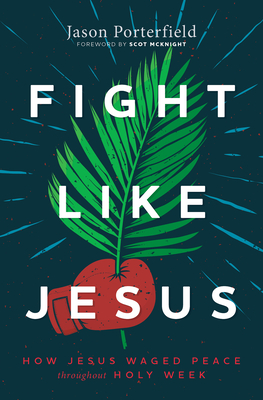 Fight Like Jesus: How Jesus Waged Peace Throughout Holy Week

By  Jason Porterfield , Foreword by  Scot McKnight
Hardcover
$ 29.99
Out of Stock In Store (Available to Order)

Throughout Holy Week, two competing approaches to peacemaking collide. What if we've embraced the wrong one?
​
At the start of Holy Week, tears streamed down Jesus' face as he cried out, "If only you knew the things that make for peace." From that moment, until a week later when he triumphantly declared, "Peace be with you," Jesus spent each day confronting injustice, calling out oppressors and contending for peace.

But what if--despite all our familiarity with the events of Holy Week--we still don't know how Jesus makes peace? And what if--despite clinging to the cross of Christ for our salvation--we've actually embraced a different approach to peacemaking? One that justifies killing enemies. One whose methods include nailing criminals to crosses. We desperately need to recover the radical vision of peacemaking that Jesus embodied throughout Holy Week. And we urgently need to be trained in his way of making peace. So, come. Let's journey together day-by-day through Jesus' final week and discover anew why he is called the Prince of Peace.

Jason Porterfield has made his home in places abandoned by society, from Canada's poorest neighborhood to the slums of Indonesia. His passion is to cultivate God's shalom wherever it is painfully absent and to help churches embrace their peacemaking vocation. In 2007, Jason joined Servants (servantsasia.org), an international network of Christian communities living and ministering among the urban poor. He was a founding member of the Servants team in Vancouver, started a new team in Indonesia, and directed operations in North America through 2015. Jason holds a master in theology from Fuller Theological Seminary and now lives in his riskiest location yet: next door to his in-laws.