Talkin' Up to the White Woman: Indigenous Women and Feminism (Indigenous Americas) 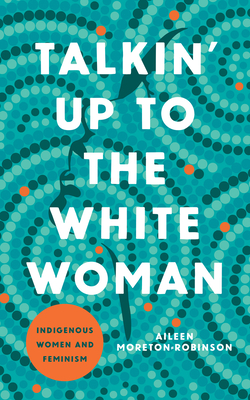 Talkin' Up to the White Woman: Indigenous Women and Feminism (Indigenous Americas)

By  Aileen Moreton-Robinson
Paperback
$ 27.00
On Our Shelves Now

A twentieth-anniversary edition of this tour de force in feminism and Indigenous studies, now with a new preface

The twentieth anniversary of the original publication of this influential and prescient work is commemorated with a new edition of Talkin’ Up to the White Woman by Aileen Moreton-Robinson. In this bold book, of its time and ahead of its time, whiteness is made visible in power relations, presenting a dialogic of how white feminists represent Indigenous women in discourse and how Indigenous women self-present.

Moreton-Robinson argues that white feminists benefit from colonization: they are overwhelmingly represented and disproportionately predominant, play the key roles, and constitute the norm, the ordinary, and the standard of womanhood. They do not self-present as white but rather represent themselves as variously classed, sexualized, aged, and abled. The disjuncture between representation and self-presentation of Indigenous women and white feminists illuminates different epistemologies and an incommensurability in the social construction of gender.

Not so much a study of white womanhood, Talkin’ Up to the White Woman instead reveals an invisible racialized subject position represented and deployed in power relations with Indigenous women. The subject position occupied by middle-class white women is embedded in material and discursive conditions that shape the nature of power relations between white feminists and Indigenous women—and the unjust structural relationship between white society and Indigenous society.