The Capitalist and the Activist: Corporate Social Activism and the New Business of Change 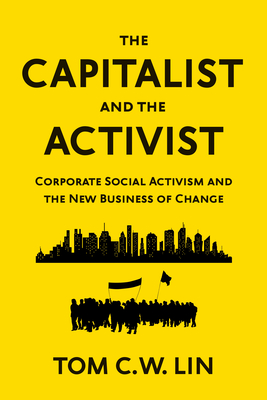 The Capitalist and the Activist: Corporate Social Activism and the New Business of Change

This is the first in-depth examination of the important ongoing fusion of activism, capitalism, and social change masterfully told through a compelling narrative filled with vivid stories and striking studies.


Today, corporations and their executives are at the front lines of some of the most important and contentious social and political issues of our time, such as voting rights, gun violence, racial justice, immigration reform, climate change, and gender equality. Why is this sea change in business and activism happening? How should executives and activists engage one another to create meaningful progress? What are potential pitfalls and risks for each side? What can they learn from each other? What first principles should guide leaders moving forward?

The Capitalist and the Activist offers an engaging and thoughtful look at the new reality of corporate social activism—its driving forces, promises and perils, and implications for our businesses and personal lives. Weaving deep research and fascinating stories that span business, entertainment, history, science, and politics, Tom Lin provides an insightful road map for how society arrived here and a practical compass for moving forward. Drawing together examples from the civil rights movement, campaign finance litigation, gun regulation, Black Lives Matter, the Confederate flag controversy, the Trump presidency, and other historical events, Lin brilliantly reveals and charts the course for a changing society of capitalists and activists seeking both profit and progress.

The Capitalist and the Activist is a must-read for anyone trying to understand the emerging future of activism, business, and politics.

Tom C. W. Lin is an award-winning law professor at Temple University’s Beasley School of Law. He is also an academic fellow at George Washington University’s Center for Law, Economics & Finance. He is an expert in business organizations, corporate governance, and financial regulation. His scholarship has been published in many leading academic law journals. His expertise has been featured in major media outlets like Bloomberg News, CNN, Fortune, the Financial Times, the Wall Street Journal, and the Washington Post. His research has also been cited by courts and regulators around the world.