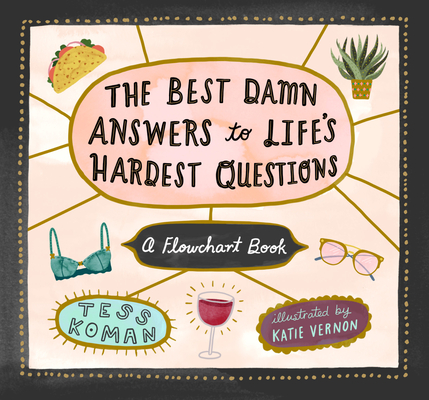 A hilarious and utterly relatable collection of flowcharts, rants, and lists about adulting.

A humorous guide to adulthood in a collection of 54 charmingly illustrated flowcharts and pros-and-cons lists that each address an all-too-real question, from the mundane to the life-changing. Will I survive this hangover? (Probably not.) Should I cancel my plans? (YES! Cancel immediately.) Am I having a quarter-life crisis? (Probably.) Do I even like this person? (Nope, nope, nope.) This inspired book of humor disguised as invaluable advice is a gift to make anyone feel better, proving that every question, thought, and decision, no matter how ridiculous or irresponsible, is completely valid.

Tess Koman is the features editor at delish.com and the former web editor at cosmopolitan.com. Her work has appeared on elle.com, seventeen.com, and esquire.com. This is her first book.

Katie Vernon is an illustrator who has spent most of her life in the midwest but whose heart belongs in the mountains. Her inspiration comes from being a florist, working with alpacas, and living on a bus. She's worked with Anthropologie, IKEA, Papyrus, Hallmark, and Chronicle Books, and she has been featured on HGTV, Design*Sponge, and OhJoy! She lives in Dubuque, Iowa.