There Are Moms Way Worse Than You: Irrefutable Proof That You Are Indeed a Fantastic Parent 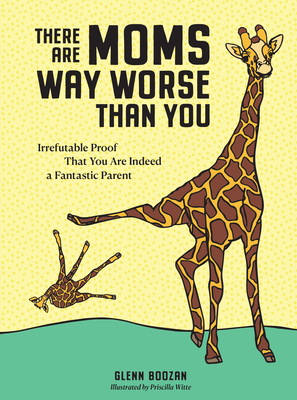 There Are Moms Way Worse Than You: Irrefutable Proof That You Are Indeed a Fantastic Parent

By  Glenn Boozan , Illustrated By  Priscilla Witte
$ 14.99
Likely On Our Shelves

A hilarious and reassuring gift for every mom: because we’re all doing the best we can, and the natural world is filled with moms worse than you!

A mom giraffe is pretty nice until the fetus drops.
She’ll birth a newborn baby calf, then kick him ’til he walks.

Whenever you feel guilty that you haven’t cleaned the house:
Sexton beetles raise their kids in a decomposing mouse.

A koala mom will feed her kids her own poop. Yes, poop. Panda moms will abandon one twin because raising two is, well, just too much. And every now and then a cuddly little hamster mom will —yup— eat her newborn pups.
These and other true facts from the animal kingdom offer a hilarious reality check on what constitutes “good parenting.” So, human mother, time to stop worrying about the job you're doing —because you’re a great mom.

Glenn Boozan is an Emmy-nominated comedy writer who wrote for CONAN, Comedy Central’s Lights Out with David Spade, and Sarah Silverman’s Hulu talk show, I Love You, America. She’s also written for the New Yorker, the Onion, and MTV. She does not care how you pronounce her last name, and her website is glennboozan.com.

Priscilla Witte is a Los Angeles–based illustrator and muralist. Her work has taken her from the Black Sea of Russia to the beaches along the coast of Bali. Some of her clients include Warner Music, Barbie, and Google. Her most recent mural is painted in downtown Los Angeles between a Jeff Koons and a Takashi Murakami. That’s a tasty sandwich.