On Being Human: A Memoir of Waking Up, Living Real, and Listening Hard 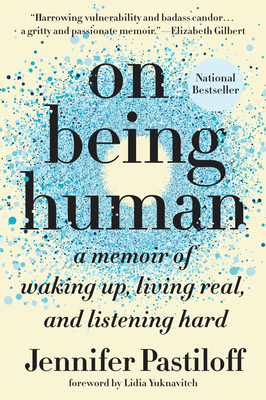 On Being Human: A Memoir of Waking Up, Living Real, and Listening Hard

“[A] powerful account of hearing loss and learning to communicate in a new way—through yoga, gratitude and radical honesty.” —People, “The Best New Books”

Centered around the touchstone stories Jen tells in her popular workshops, On Being Human is the story of how a starved person grew into the exuberant woman she was meant to be all along by battling the demons within and winning.

Jen did not intend to become a yoga teacher, but when she finally left her thirteen-year waitressing job and said yes to her first workshop, it was a choice that changed her life. After years of feeling depressed, anxious, and hopeless in a life that seemed to have no escape, she healed her own heart by caring for others. Since then, she has learned to fiercely listen despite being nearly deaf, to banish shame attached to a body mass index, and to rebuild a family after the debilitating loss of her father when she was eight. Through her journey, Jen conveys the experience most of us are missing in our lives: being heard and being told “I got you.”

Exuberant, triumphantly messy, and brave, On Being Human is a celebration of happiness and self-realization over darkness and doubt. Her complicated yet imperfectly perfect life path is an inspiration to live outside the box and to reject the all-too-common belief of “I am not enough.” Jen will help readers find, accept, and embrace their own vulnerability, bravery, and humanness.

Jennifer Pastiloff travels the world with her unique workshop On Being Human, a hybrid of yoga-related movement, writing, sharing aloud, and the occasional dance party. She is a frequent contributor to Shape magazine, including Shape Escape at Miraval Resort and the Women Run the World initiative, and has been featured on Good Morning America, New York magazine, Health magazine, and other media outlets for her unique style of teaching, which she has taught to thousands of women in sold-out workshops all over the world. Jen is also the guest speaker at Canyon Ranch, and she leads Writing and the Body workshops with author Lidia Yuknavitch, as well as retreats with Emily Rapp Black. Founder of the online magazine The Manifest-Station, Jen is based in Los Angeles with her husband and son and a cup of coffee.