Midnight Flight to Nuremberg: The Capture of the Nazi Who Put Adolf Hitler Into Power 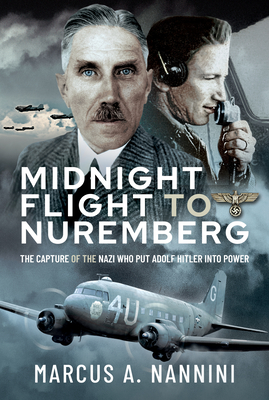 Midnight Flight to Nuremberg: The Capture of the Nazi Who Put Adolf Hitler Into Power

This is the story of an American C-47 'Dakota' pilot who earned three Air Medals, seven Battle Stars and flew twenty-seven combat missions during the Second World War. As a young U.S. pilot, Harry Watson, arrived in Britain as the Battle of Normandy was reaching its crescendo. Thrown immediately into the fray, Harry, along with more than 200 aircraft, set off to carry supplies to the troops fighting in France. But with visibility reduced to zero, the aircraft were ordered to turn back - all did except Harry, who successfully delivered his life-saving cargo of blood and US Army nurses.

Harry continued to take risks, which resulted in many hair-raising episodes. This included almost being caught on the ground, while on an urgent fuel resupply mission for a platoon of General Patton's tanks, by a German Mk.IV panzer and a battalion of supporting infantry.

He flew throughout Operation Market Garden, losing a close friend to German anti-aircraft fire while taking some hits to his own plane. Thereafter he led a flight of five transports on a desperate mission to evacuate a mobile field hospital that was about to be over-run by the SS. Only four of the planes made it back as they came under direct fire just before they could take-off with scores of casualties and medical personnel crammed aboard each Dakota.

Around midnight, in early April 1945, he was sent on a secret mission to fly to a point near Nuremberg, which was behind enemy lines at the time. It was necessary for him to locate an empty meadow in the dark, land, load a party of US soldiers and their captives, and then take-off again. He pulled it off. Among those prisoners was Franz von Pappen, the man who had persuaded President Hindenburg to make Hitler Chancellor of Germany in 1933. Von Papen had been seized at his own home by First Lieutenant Thomas McKinley and his men from the US 194th Glider Infantry Regiment.

Based on his own recollections, as told to the author Marcus Nanni, this is Harry Watson's exciting account of the air war told, unusually, through the words of a transport pilot.