The Apocalypse of History 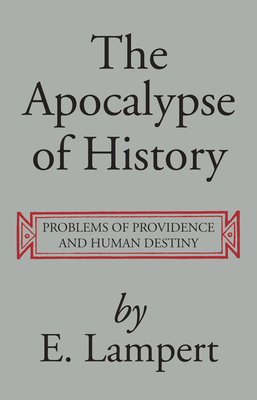 The Apocalypse of History

In this book Dr. Lampert is concerned with the possibility of a philosophy of history--that is to say, with the possibility of affirming a meaning in History. Such an affirmation must be made within the framework of Judeo-Christian thought, born of the expectation of the messianic kingdom. This is not an attempt to found a ""scientific"" theory of History, on the basis of general laws and principles: for man is too much an historical being and a part of History to be able to observe it from without. The course of historical Time is seen to depend on the intensity of Man's experience, on human hopes, joys and sufferings; it is inseparable from the inner destiny of Man. Time is an eventful process, a drama having a beginning and an end. The end is manifested in the incarnate God who enters Time and identifies himself with Man, and yet in this self-identification transcends Time and Man. While the book is of special importance for theologians, the nature of its subject, and the historical situation in which we find ourselves, combine to give it a relevance to the problems of our time which should attract a much larger circle of readers. Evgeny Lampert (1914-2004) was lecturer in Russian Oxford University and founded the Russian Studies department at Keele University. In addition to his early writings on Russian theology literature, Lampert wrote several books on the history of pre-Soviet Russian radicalism including Sons Against Fathers (1965).