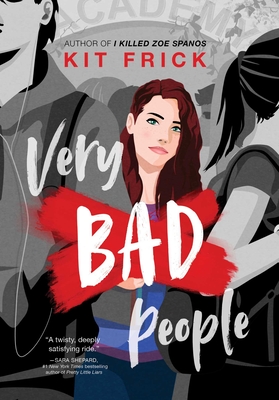 First editions have an exclusive foil design underneath the jacket!

In this dark academia young adult thriller for fans of The Female of the Species and People Like Us, a teen girl’s search for answers about her mother’s mysterious death leads to a powerful secret society at her new boarding school—and a dangerous game of revenge that will leave her forever changed.

Six years ago, Calliope Bolan’s mother drove the family van into a lake with her three daughters inside. The girls escaped, but their mother drowned, and the truth behind the “accident” remains a mystery Calliope is determined to solve. Now sixteen, she transfers to Tipton Academy, the same elite boarding school her mother once attended. Tipton promises a peek into the past and a host of new opportunities—including a coveted invitation to join Haunt and Rail, an exclusive secret society that looms over campus like a legend.

Calliope accepts, stepping into the exhilarating world of the “ghosts,” a society of revolutionaries fighting for social justice. But when Haunt and Rail commits to exposing a dangerous person on campus, it becomes clear that some ghosts define justice differently than others.

Kit Frick is a MacDowell Fellow and International Thriller Writers Award finalist from Pittsburgh, Pennsylvania. She studied creative writing at Sarah Lawrence College and received her MFA from Syracuse University. The author of the poetry collection A Small Rising Up in the Lungs and the young adult thrillers Before We Were Sorry (originally published as See All the Stars), All Eyes on Us, I Killed Zoe Spanos, Very Bad People, and The Reunion, Kit loves a good mystery but has only ever killed her characters. Honest. Visit Kit online at KitFrick.com and on Twitter and Instagram @KitFrick.