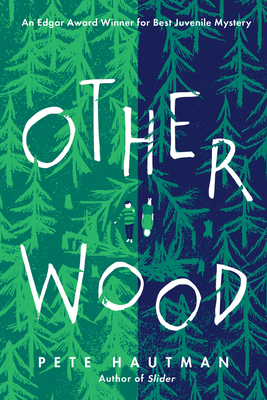 What happened in the woods that day? Pete Hautman’s riveting middle-grade novel touches on secrets and mysteries — and the power of connections with family and friends.

“Hatred combined with lies and secrets can break the world.” Grandpa Zach used to say that before he died, but Stuey never really knew what he meant. It was kind of like how he used to talk about quantum physics or how he used to say ghosts haunted their overgrown golf course. But then one day, after Stuey and his best friend, Elly Rose, spend countless afternoons in the deadfall in the middle of the woods, something totally unbelievable happens. As Stuey and Elly Rose struggle to come to grips with their lives after that reality-splitting moment, all the things Grandpa Zach used to say start to make a lot more sense. This is a book about memory and loss and the destructive nature of secrets, but also about the way friendship, truth, and perseverance have the ability to knit a torn-apart world back together.

Pete Hautman is the author of many books for young adults and adults, including the National Book Award–winning Godless, the Klaatu Diskos trilogy, and Eden West. His most recent book for middle-grade readers is Slider, which Booklist lauded for its “crystalline prose, delectable detail, and rip-roaring humor.” Pete Hautman divides his time between Wisconsin and Minnesota.