The Brand New Catastrophe: A Memoir 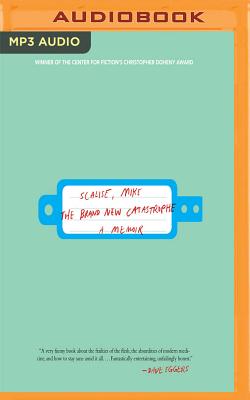 The Brand New Catastrophe: A Memoir

After a tumor bursts in Mike Scalise's brain, leaving him with a hole in the head and malfunctioning hormones, he must navigate a new alien world of illness maintenance. His mother, who has a chronic heart condition and a flair for drama, becomes a complicated model as she competes with him for the status of "best sick person." The Brand New Catastrophe is a moving, funny exploration of how we define ourselves by the stories we choose to tell. And here, in audio, Scalise tells his stories directly to the listener, bringing added depth and unmatched sincerity to this very personal story.

Mike Scalise's work has appeared in The New York Times, The Wall Street Journal, Agni, Indiewire, The Paris Review Daily, and elsewhere. He has received fellowships and scholarships from Bread Loaf, Yaddo, and the Ucross Foundation and was the Philip Roth Writer in Residence at Bucknell University. He lives in Brooklyn, New York.

The Brand New Catastrophe is the winner of the Center for Fiction's Christopher Doheny Award, which recognizes excellence in writing about serious illness. The prize was created by Audible in honor of Chris Doheny, a long-time employee who lost his battle with cystic fibrosis in 2013.