Parentpreneurs: A Decade of Deals from a Messy Minivan 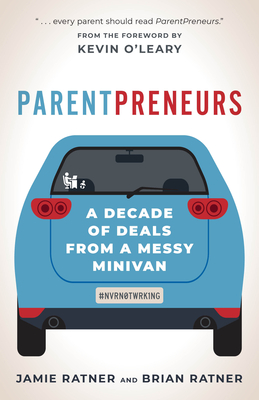 Parentpreneurs: A Decade of Deals from a Messy Minivan

By  Jamie Ratner , Brian Ratner , Foreword by  Kevin O'Leary
$ 19.95
Likely On Our Shelves

"This fun tale is entertaining and inspiring in equal measure." Publishers Weekly Come along for the ride, as Jamie and Brian Ratner show you how to build a successful business with your spouse. When Jamie Ratner pitched her new idea for a family-friendly Groupon to her husband Brian on their drive to Pittsburgh for the Christmas holiday in their messy minivan, Brian's response shocked her. He said, "That's a great idea." For the rest of their holiday, while his parents watched their two young kids, they worked late into the night on a business plan and timeline to launch what soon would become CertifiKID. Jamie was an entrepreneur at heart but had no business background. Brian was a partner at a Washington, DC, law firm whose practice was litigation not corporate law. They had no free time. The timing to start a business was far from ideal. They did it anyway. More than a decade later, in ParentPreneurs, Jamie and Brian tell their rollercoaster story of how they built a multi-million dollar company through thousands of deals with small and big businesses for the benefit of their million plus members; cut a deal with Kevin O'Leary (aka "Mr. Wonderful") on the ABC television show Shark Tank that was one of his biggest deals in 10 seasons; and navigated the Covid pandemic that sent their business to the edge of the cliff by making a risky pivot acquisition. They give an honest account from each of their own unique perspectives on the toll and rewards of mixing marriage and business at every stage. They provide tips and lessons for how to manage both, maintain work/life balance especially in this age of remote and flexible work, and accomplish your personal and professional goals. This is a book for every entrepreneurial parent, whether you're in the game or just thinking about it. It is real and uplifting, and it will inspire you to rethink how you view your work and determine whether you can start or build something new that will bring you greater joy and fulfillment. Jamie and Brian show how parents can be successful entrepreneurs and entrepreneurs can be successful parents and spouses. And so can you.

Jamie Ratner is the CEO and founder of CertifiKID, a recognized best deal website for parents. Over the past decade and with CertifiKID's recent acquisition of Macaroni KID, Jamie has grown CertifiKID from a regional deal website to one of the country's largest parent-focused digital media and advertising companies, reaching millions of families nationwide and backed by an investment from Shark Tank's Kevin O'Leary. Jamie was named one of Greater Washington's top women business leaders by Washington SmartCEO. A soccer mom and entrepreneur (aka "ParentPreneur"), she's a leading expert in the daily deal, parent, and digital media space. Brian Ratner is the cofounder and president of CertifiKID. He is also a founding partner of Hausfeld, a global litigation law firm headquartered in Washington, DC, where he serves as global co-chair of the firm and specializes in global antitrust litigation. Brian has been featured on the Washington, DC Super Lawyers and The Legal 500 Leading Lawyers Lists since 2014 and has been selected by Lawdragon as one of the 500 Leading Lawyers in America for the past three years. Jamie and Brian Ratner live in Potomac, Maryland with their two children.