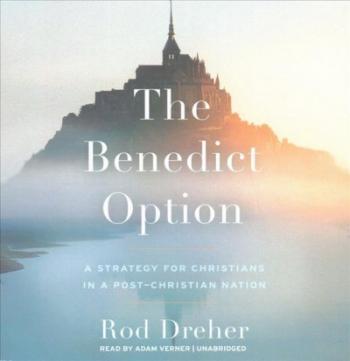 American Christianity is in decline. From the outside, churches are beset by challenges to religious liberty in a rapidly secularizing culture. From the inside, they are being hollowed out by the departure of young people and a watered-down pseudospirituality. Conservative Christian political influence has collapsed. Confused and frightened Christians wonder: What went wrong? What's next? Do we have a future in post-Christian America?Rod Dreher argues that the way forward is actually the way back--all the way back to Saint Benedict of Nursia. This sixth-century monk, horrified by the decadence of Rome, retreated to the forest and created a new way of life for Christians under Barbarian rule. He and his fellow monks built resilient communities based on principles of order, hospitality, stability, and prayer. By creating spiritual centers of hope that were strongholds of light through the Dark Ages, they saved not just Christianity, but Western Civilization.The Benedict Option is the guide for Christians under siege today. Politics won't save them, and neither will the courts. In this visionary book, Dreher urges today's faithful to be new Saint Benedicts. Drawing on monasticism's ancient wisdom, Christians must build up the local church, create new schools, and take up practices that prepare them to face the twenty-first-century world with the confidence and fervor of the early church.Both philosophically astute and eminently practical, The Benedict Option is for Christians who know something has gone terribly wrong but don't know what to do about it. This book offers hope and a plan for surviving and thriving in the chaos and growing darkness of our time.