Always Be My Duchess (Taming of the Dukes #1) 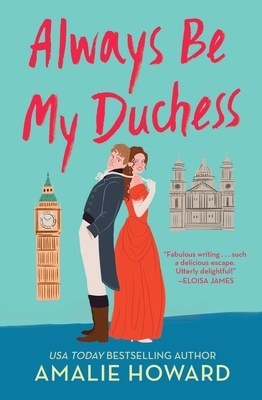 Always Be My Duchess (Taming of the Dukes #1)

By  Amalie Howard
Paperback
$ 15.99
Pre-Order (Not Yet Published)

Lord Lysander Blackstone, the stern Duke of Montcroix, has only one interest: increasing his considerable fortune. After a series of betrayals, he keeps his emotions buried deep. Money, after all, can't break a man's heart—or make promises it can’t keep. But when his reputation for being heartless jeopardizes a new business deal, he finds himself seeking a most unusual—and alluring—solution . . .

Once an up-and-coming ballerina, Miss Geneviève Valery is now hopelessly out of work. After refusing to become a wealthy patron's mistress, Nève was promptly shown the door to the streets. When she accidentally saves the life of a handsome duke, she doubts the encounter will go any better than her last brush with nobility. But instead of propositioning her, Montcroix makes Nève an offer she would be a fool to refuse: act as his fake fiancée in exchange for fortune enough to start over.

Only neither is prepared when very real feelings begin to grow between them. They both stand to win . . . but only if they’re willing to risk their hearts.

Amalie Howard is a USA Today and Publishers Weekly bestselling novelist of “smart, sexy, deliciously feminist romance.” The Beast of Beswick was one of Oprah Daily’s Top 24 Best Historicals to Read. She is also the author of several critically acclaimed, award-winning young adult novels. An AAPI/Caribbean-born writer, she has written articles and interviews on multicultural fiction that have appeared in the Portland Book Review, Ravishly magazine, and Diversity in YA. When she’s not writing, she can usually be found reading, being the president of her one-woman Harley Davidson motorcycle club #WriteOrDie, or power-napping. She currently lives in Colorado with her husband and three children.