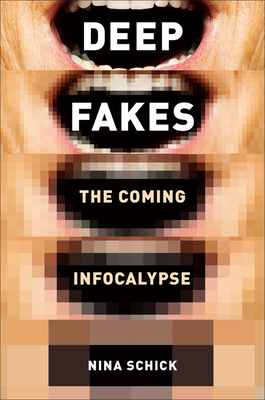 Uncover everything you need to know about "deepfakes" and what could become the biggest information and communications meltdown in world history.

In a world of deepfakes, it will soon be impossible to tell what is real and what isn't. As advances in artificial intelligence, video creation, and online trolling continue, deepfakes pose not only a real threat to democracy -- they threaten to take voter manipulation to unprecedented new heights. This crisis of misinformation which we now face has since been dubbed the "Infocalypse."

In DEEPFAKES, investigative journalist Nina Schick uses her expertise from working in the field to reveal shocking examples of deepfakery and explain the dangerous political consequences of the Infocalypse, both in terms of national security and what it means for public trust in politics. This all-too-timely book also unveils what this all means for us as individuals, how deepfakes will be used to intimidate and to silence, for revenge and fraud, and just how truly unprepared governments and tech companies are for what's coming.

Nina Schick regularly contributes to international broadcasters including CNN, Bloomberg, Sky, and the BBC. Her work has been published by the Times, the Telegraph, and the New Statesman, amongst others. She is a political commentator, advisor, and public speaker, specializing in how technology is reshaping politics in the 21st century. She holds degrees from Cambridge University and University College London. She divides her time between London, Berlin and Kathmandu.