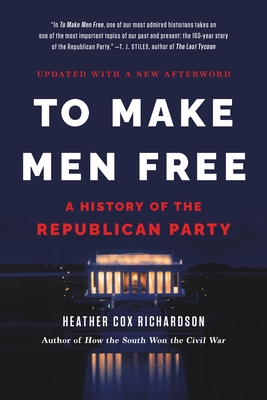 By  Heather Cox Richardson
Paperback
$ 19.99
Likely On Our Shelves

“The most comprehensive account of the GOP and its competing impulses” (Los Angeles Times), now updated to cover the Trump presidency and its aftermath

When Abraham Lincoln helped create the Republican Party on the eve of the Civil War, his goal was economic opportunity for all Americans. Yet the party quickly became mired in an identity crisis. Would it be the party of democratic ideals? Or the party of moneyed interests?

In To Make Men Free, acclaimed historian Heather Cox Richardson traces the shifting ideology of the Republican Party from the antebellum era to the Great Recession. While progressive Republicans like Teddy Roosevelt and Dwight Eisenhower revived Lincoln’s vision and expanded the government, their opponents appealed to Americans’ latent racism and xenophobia to regain political power, linking taxation and regulation to redistribution and socialism. In the modern era, the schism within the Republican Party has grown wider, pulling the GOP ever further from its founding principles.

Now with a new epilogue that reflects on the Trump era and what is likely to come after it, To Make Men Free is a sweeping history of the party that was once considered America’s greatest political hope, but now lies in disarray.

Heather Cox Richardson is an American historian and professor of history at Boston College. Her daily newsletter, Letters from an American, has over a half million subscribers. The author of How the South Won the Civil War, West from Appomattox, The Greatest Nation of the Earth, and The Death of Reconstruction, she splits her time between Boston and Maine.